Testing that Occurs During Pregnancy

An ultrasound, or a sonogram, is a diagnostic screening technique that utilizes high-frequency sound waves transmitted from a hand-held instrument called a transducer into the body to create images of internal anatomical structures.  The sound waves are reflected back as an echo that a computer translates into an image of the body area being examined.  An ultrasound can be performed from on top of your abdomen or from inside your vagina. Because ultrasound does not involve exposure to ionizing radiation (as X rays do), it is a safe screening tool for many areas of the body.

The technique can be safely used during pregnancy to assess the position, size/weight, and gestational age of the fetus and the location of the placenta, as well as the cervical length.  Ultrasounds can also reveal a pregnancy with twins.

Ultrasounds can detect some structural abnormalities in the fetus during pregnancy.  Not all abnormalities in a fetus can be detected by ultrasound.  Fetal sex may be determined during an ultrasound, though this is not the purpose of your ultrasound and is not a reason to order a scan.  Ultrasound is not 100% accurate in determining sex.

Who will be performing my ultrasound? 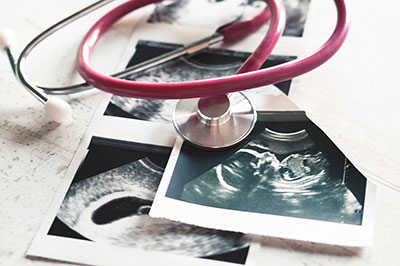 At the beginning of your pregnancy, your provider will order several labs. These labs are to review the overall health of the mother.  Many health problems that affect a mom can and do affect the unborn baby.  This set of testing includes complete blood count, blood type and Rh factor,  rubella, Hepatitis B and C, sexually transmitted diseases, and HIV. Any active infections will be treated and if your Rh factor is incompatible, you will receive a medication during your pregnancy to ensure that your body does not make antibodies against your baby’s red blood cells.

At each visit, our provider will ask that you leave a urine sample prior to being seen. Our Medical Assistants test your urine for a variety of things such as protein, glucose, nitrates, and pH.  These simple tests can help detect gestational diabetes,  kidney  dysfunction, infection and preeclampsia for example.

Around the 27th or 28th week of your pregnancy, you will have a one-hour Trutol test. This is a simple blood test done when you return for an OB appointment. It is intended to identify the 2-3% of all pregnant women who have gestational diabetes.

Gestational diabetes is a form of diabetes brought on by the hormonal changes of pregnancy that interfere with your body’s ability to produce insulin (which causes you and your baby to have higher levels of blood sugar). It most often occurs later in pregnancy, but usually can be controlled with a special diet. In some cases, you may require insulin. Some patients will be referred to the Kehl Diabetes Center for education and support. Uncontrolled diabetes can increase the incident of bladder or kidney infections and toxemia. It can also increase the chance of your baby having respiratory problems, being stillborn or delivery problems due to a very large baby.

There is no preparation needed for the test. It is not necessary to fast before the test. One hour before your blood is taken by a finger stick, you will drink a glass of chilled glucose solution called Trutol. This should be consumed in 2 minutes. You should not eat or drink anything for the next hour.  You should also not smoke or chew gum. You are able to be active and to use the restroom.  You will then have your OB appointment.

One hour after you drank the Trutol you will be called back to the office laboratory for a finger stick glucose test.  (You may also have a hemoglobin done to check for anemia at the same time).  The results of the test may take a few minutes, but you will be informed of the results prior to leaving our office. If the level is normal, there is very little chance of you having gestational diabetes even later in pregnancy. But if your level is elevated, you will need to schedule a 3-hour oral glucose tolerance test at the hospital or lab. But the majority of these tests are negative even after an elevated one-hour Trutol screening.

Instructions for the 3 Hour Glucose Tolerance Test can be found at the end of this packet. If you have dietary restrictions or allergies to certain ingredients, please speak with your provider about alternatives to the Trutol test.

Group B Streptococci (GBS) are bacteria found commonly in our environment.  15 to 40% of women carry Group B Strep in their vagina or rectum.  (This is different than Group A Strep which causes Strep throat.)  These bacteria may be transmitted to a baby during labor and delivery (or even before).

Most babies (98-99%) who get GBS from their mothers do not have any problems.  But the 1-2% of women who carry this type of Strep will have babies that get sick from the bacteria.  This rate increases to 4% if additional risk factors are present.

Infection can cause inflammation of the baby’s blood, lungs or brain.  Fifteen percent of babies that become infected may die of the disease – this is less than one baby in every 1000 deliveries.  However, babies can become infected from other sources in the hospital, or after going home.

Because this can be a serious disease, many attempts have been made in the past to decrease the incidence.  Most people with bacteria show no symptoms and are called carriers (with colonies usually in the rectum or vagina).  Infection in the bladder, kidneys or uterus usually is not serious and can be treated with antibiotics.  But women can become recolonized after treatment during pregnancy.